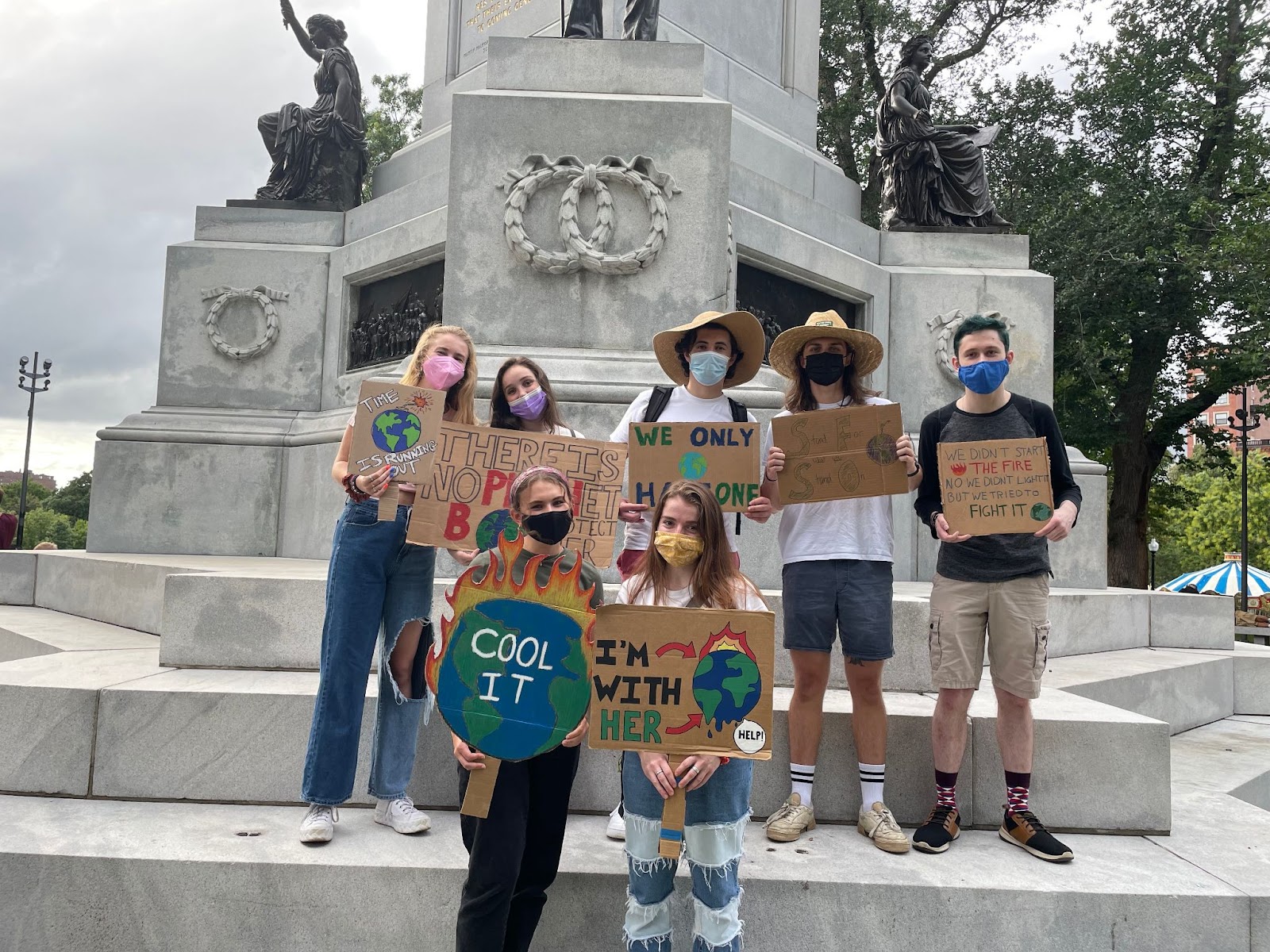 Going to a climate strike wasn’t exactly something I had on the to-do list for my fall semester. I did want to get more involved with some new clubs on campus, meet new people, and make the most of being able to be in-person at school by spending less time in my room and more time out and about just doing things. So that’s exactly what I did. I went to my first Second Hand Hounds meeting, a club focusing on curbing the issue of fast fashion with the goal of eventually having an on-campus thrift store. While I was at the meeting, they talked about going to a climate strike in Boston just three days later and said anyone was welcome to join. I threw my name on the sign-up list on a whim and told myself I would think about it but that I probably wouldn’t actually go. When I nonchalantly asked my boyfriend if he would at all be interested in going with me, to my surprise, he said yes. Now I had a friend, so I had to go.

We left right after our classes one Friday afternoon. Don’t be fooled, we were running late, I was stressed we wouldn’t be able to find parking and I was frustrated my sign kept falling apart, but at least we were on the road. When we got to Boston, we parked in a garage by the Boston Commons and made our way down the road to meet up with the rest of our group. We spent most of the first hour trying to figure out where the strike actually was, because they were nowhere near where the march was supposed to start. We joined with a group of students from Rhode Island who were looking just as lost as we were and set out, basically walking the length of Boston Commons.

After we had been walking a while, we heard a faint chanting in the distance. We started running towards the sound, and sure enough watched the strike turn the corner of the road. We all joined up in the middle of the marchers and congratulated each other for finally finding them. We spent about twenty minutes marching and chanting, holding our signs high before we arrived at the Soldiers and Sailors Monument in the Commons. Organizers of the strike set up participants around a microphone and up and down the monument and led a few more chants. Then we waited.

There were several speakers with diverse experiences from mine, there was one girl who had immigrated to the U.S. fleeing a war caused in part by environmental decline. Multiple Native American students spoke on the damage being done to what used to be their land. There was one student who was still on the train trying to get to the protest from her classes, so she gave her speech via phone with someone else holding their phone up to the microphone. I learned so much in that half hour, and I was so grateful to these powerful young people who were reminding me why I had even come to Boston that day. I left feeling empowered and motivated to seek change. I’ve since researched what legislation there is in trying to mitigate and prevent further climate change and have called some of my representatives from Maine. I’ve always known that climate change is a real issue and is something that I’m worried about, but after going to the Boston Climate Strike, I learned what people my age were doing to fight.

View all posts by valleygirlmagazine

VALLEY GIRL MAGAZINE IS OFFICIALLY FOR SALE! We are selling from 11:30-12:30 during the common hours in charlie’s! Come get your copy today!
VALLEY GIRL MAGAZINES 1st EDITION LAUNCHES TOMORROW 4/12 AT OUR 1ST ANNUAL LAUNCH PARTY. Come decorate a tote bag, have some insomnia cookies and make a mocktail!
We are just 4 days away from the valley girl launch party! Come make a mocktail, take some pictures, decorate a tote bag and eat a cookie!
LETS HEAR IT FOR OUR HOUNDS!! TODAY the hounds dance and cheer team will be performing in the NDA AND NCA competitions in daytona beach! The two teams have been working so hard this whole year and it all comes down to today. You can read more about their journey to nationals in the first edition of Valley Girl Magazine available on APRIL 12!
LAUNCH PARTY TUESDAY APRIL 12 at 7! Come paint your own tote bag! There will be a mocktail station, photo booth, insomnia cookies and FUN PRIZES LIKE A JBL SPEAKER AND GIFT CARDS!
%d bloggers like this: